China news and analysis to 14 October not surprisingly focuses on the CCP Congress which gets underway on the 18th, including a selection of the many helpful guides and commentaries on the Congress, plus pandas.

Under Xi Jinping, China is turning back to dictatorship (Financial Times, 11 October)

For the first time in nearly four decades there is not even a suggestion that China is moving towards building civil society or letting its people have more say in how they are governed. Instead, Mr Xi offers them a vague notion of “great rejuvenation” that borrows heavily from the premodern era of godlike emperors who ruled “all under heaven”. The rejection of “western” political systems has been made easier recently by what the Chinese see as the ludicrous buffoonery of Donald Trump and, to a lesser extent, the self-inflicted damage of Brexit and EU infighting. Given the perceived failings of liberal democracy, many, perhaps most, Chinese are quite willing to accept creeping dictatorship and political persecution of individuals as long as they continue to see their livelihoods improve. 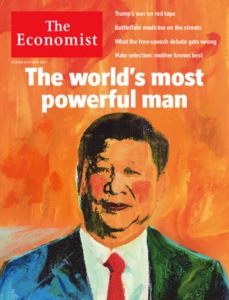 Xi Jinping has more clout than Donald Trump. The world should be wary (The Economist, 13 October)

One-man rule is ultimately a recipe for instability in China, as it has been in the past—think of Mao and his Cultural Revolution. It is also a recipe for arbitrary behaviour abroad, which is especially worrying at a time when Mr Trump’s America is pulling back and creating a power vacuum. The world does not want an isolationist United States or a dictatorship in China. Alas, it may get both.

Richard McGregor argues that Xi Jinping, a politically daring, economically cautious, Chinese leader is certain to win a second five-year term at the 19th Party Congress, but his harsh line against his opponents, and his timidity on the economy, may come back to haunt him in his second term.
• Xi Jinping is China’s most disciplined and powerful leader in a generation, and faces no visible obstacles to his standing heading into the 19th Party Congress.
• Xi’s influence is most obvious within the party itself, in the way he has centralised power in his office and within Chinese Communist Party departments, notably the propaganda and anti-corruption bureaus.
• Xi has been a cautious steward of the economy, by contrast, shoring up state firms, and increasing the government’s hold over the private sector.

A Communist party publishing blitz ahead of next week’s political summit means the shelves of Chinese bookshops are now packed with Xi Jinping-themed works designed to strengthen both his reputation and his rule.

Officially, the Five Years On exhibit – timed to mark the end of Xi’s first term in power – is a celebration of the advances China as a whole has made in that time. But Xi, whose supremacy will take centre stage when a key Communist party congress kicks off in Beijing on 18 October, is the undoubted star of the show.
Scores of photographs of the 64-year-old strongman adorn the walls of the retrospective, split by Communist party curators into 10 thematic “zones” touting Xi’s purported triumphs in areas such as foreign policy, the environment and the war on corruption. Exhibition guides in burgundy flight attendant uniforms proffer anecdotes about the travails of a leader party officials now hail as their “core”.
https://www.theguardian.com/world/2017/oct/09/five-years-all-conquering-xi-jinping-china-heralds-its-leader-in-ecstatic-beijing-exhibition 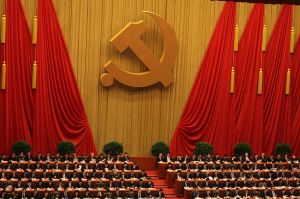 Except for President Xi Jinping and Premier Li Keqiang, five of the seven members of the party’s top body, the Politburo Standing Committee (PSC), are set to retire later this year.
Given the opaque nature of Chinese politics, it is tricky to say who will fill the vacancies – though it is certain that they will likely be those close to Mr Xi.

Chinese Village Where Xi Jinping Fled Is Now a Monument to His Power (NYTimes, 8 October)

Turning a leader’s former home into a tableau for propagating his political-creation myth has a venerable precedent in the People’s Republic. Back in the 1960s, Mao’s birthplace, Shaoshan, was turned into a secular shrine for slogan-chanting Red Guards who looked on modern China’s founder as a nearly godlike figure. The devotion at Liangjiahe falls far short of the fervent cult of personality that Mao ignited. Even so, Mr. Xi stands out for turning his own biography into an object of adoration, and zeal. Neither of Mr. Xi’s recent predecessors as leader, Hu Jintao and Jiang Zemin, could tout a similarly dramatic tale of coming of age in a dim, flea-infested cave.

Just as Shaoshan did for Mao, Liangjiahe has come to figure prominently in Mr. Xi’s official biography. When he arrived at the age of 15 in early 1969, as one of millions of Chinese youth sent to the countryside by Mao, the village’s 360 residents lived in caves dug into the dry, ocher-colored hillsides, and eked a meager existence out of the dusty soil. According to the current narrative, Mr. Xi showed his first signs of greatness in the then-penniless village, rising to a position of local party leadership.

Many of Mr. Xi’s accomplishments and his likely plans for the future are underpinned by an idealistic view that China’s 200-year eclipse is ending now, and it is his mission to lead a rigidly controlled China back to the center of the world stage.

For foreigners, this means getting used to a China that is stronger and more assertive — but possibly more brittle — than in the past. If Mr. Xi is successful, his China could become a model for digitally driven authoritarianism around the world, while failure could force a reconsideration of the wisdom of trying to force-march a country to modernity.

‘In the West, a political party’s national congress is merely an electoral event with noisy slogans. China’s party congress, by contrast, has some electoral elements, including the selection of the ruling party’s Central Committee, but its main job is to discuss and decide on the basic policies that will be adopted for the nation’s governance. Like it or not, the Communist Party is the real leader of China.

‘This kind of political arrangement may not be popular in the West, and the Western media has tended to criticise that which is different, seeing it as politically incorrect, inferior, corrupt, lacking checks and balances, and so on. But, in light of the recent problems in Western democracies, particularly when contrasted with Chinese accom­plishments since 1979, there have been fewer nega­tive comments of late. Chinese systems are not necessarily weak, let alone wicked; the facts about China say just the opposite.’

China’s Communist party congress – all you need to know (The Guardian, 12 October)

Excellent guide to the Congress from Dr Yu Jie, Head of China Foresight at the LSE

The China Path vs The Western Model (The Diplomat, 12 October)

Kristin Shi-Kupfer, the Director of Politics, Society and Media Research Area at the Mercator Institute for China Studies in Berlin, writes about a MERICS analysis of debates on prominent Chinese online bulletin boards such as Weibo, Tianya or Tiexue Net.

The online debates clearly show that the party-state has not been able to unite its population behind a coherent ideology and to create a “Chinese” alternative to “Western” values and models of governance. And despite all of the obvious problems in Western societies, “Western” education and lifestyles represent the blueprint for a better life for a majority of urban Chinese – at least for now.

More than 35 tech companies, including large groups such as Sina and Baidu, have quietly instituted party committees in recent years. These assess a company’s daily operations to ensure they do not stray from party objectives, but had typically been given little fanfare because of concerns around alienating foreign partners and investors. But now tech groups are increasingly promoting their party ties.

To remain in favour with the government, three of China’s biggest tech groups — Baidu, Alibaba and Tencent — have been careful to demonstrate loyalty to the party, said Shaun Rein, managing director of China Market Research Group. “[The groups] almost have more power than the SOEs [state-owned enterprises] right now, but the government trusts them to heed their call to do whatever the regulatory bodies want,” he said.

INFOGRAPHIC: How the CCP Rules, a Guide to China’s leaders of party and state (Fairbank Center for Chinese Studies)

As leaders meet in Beijing for the 19th Party Congress, the Fairbank Center presents a visual guide to understanding China’s elite politics.

We do not expect an immediate economic impact from the 19th Party Congress, although Xi Jinping’s report at the opening of the meeting will provide a flavour of the policy stance for the coming five years.

A more detailed policy prescription will have to wait for the third plenary session, expected to be held in late 2018.

We expect a broad continuation of the gradual, erratic approach to policymaking of recent years, not least in key areas such as supply-side reform and financial deleveraging.

China has a long list of state secrets – how many people it puts to death every year, and even the birthdays of its top leaders. But now, overseas researchers have uncovered another Chinese state secret: how much money Beijing gives in aid to other countries. Not very long ago, China was a foreign aid recipient. Now, it rivals the United States as one of the world’s largest donors, through traditional development aid or through financial loans.

For the first time, a large group of researchers outside China have compiled a major database detailing virtually all of China’s financial money flow to recipient countries. Citing more than 5,000 projects found across 140 countries, it reveals that China and the US rival each other in terms of how much they offer to other countries. However, “they spend those budgets in radically different ways. And the different compositions of those portfolios have far-reaching consequences”, explains Brad Parks, the project’s chief researcher. He heads the AidData research lab (http://aiddata.org/data/chinese-global-official-finance-dataset) at the College of William & Mary in Virginia, which teamed up with other researchers at Harvard University and the University of Heidelberg in Germany to complete the research.

Frances Adamson, Australia’s chief foreign affairs bureaucrat, called for debate not to be stifled in classrooms. It follows recent claims of embassy influence on campuses – dismissed as “smear” by Chinese diplomats in June. Ms Adamson, a former Australian ambassador to China, said universities must remain “secure and resilient” when “exposed to unexpected pressure”. “As China becomes more important to Australia’s future and that of the world, it follows that there will be more scrutiny of China, including the way it seeks to exercise influence internationally,” she said.

Foreign Secretary Boris Johnson has said he is “very concerned” after a British human rights activist was denied entry to Hong Kong.
Benedict Rogers has been a vocal critic of Chinese-ruled Hong Kong’s human rights record. Mr Johnson said he would seek an “urgent explanation” from the Hong Kong authorities and the Chinese government.
http://www.bbc.co.uk/news/uk-politics-41586529

China has rebuffed criticism of its decision to bar a prominent British activist from Hong Kong, declaring itself unshakably opposed to foreign interference in the former colony’s affairs.
Speaking a day after the Conservative human rights campaigner Benedict Rogers was refused entry to the financial hub, Hua Chunying, a spokesperson for China’s foreign ministry, said decisions about who was allowed to enter were a matter of Chinese sovereignty. 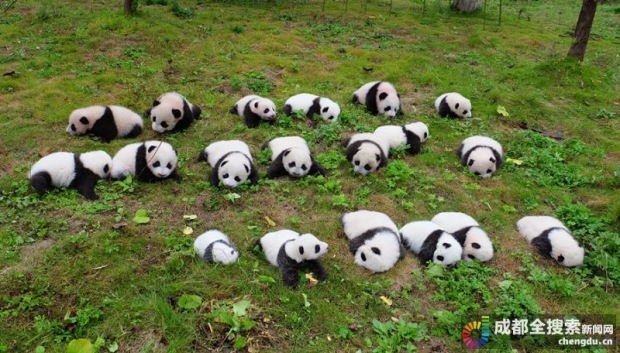 Three dozen panda cubs, all born during 2017, have gone on show in Sichuan Province. In total 42 cubs have been born so far this year at China’s Giant Panda Protection and Research Centre, including 15 sets of twins.