Framing—a martyr and dissident or an agitator and instigator?

In my previous blog post, I wrote about the life of Liu Xiaobo.

In part 2, I look more closely at how media frames affect the coverage of Liu Xiaobo’s work, life, and death. It is important to note that ‘frame’ here does not refer to the commonly used meaning that someone is ‘framed’ for a transgression, but rather as a key method of looking at political communication.

‘Framing refers to the process by which people develop a particular conceptualisation of an issue or reorient their thinking about an issue’ (Chong & Druckman, 2007b: 104). In other words, the use of a specific frame can change the way a person engages with an idea or issue and tapping into this is an important method used by governments around the world. It can be seen in free media, controlled media, and propaganda alike. In a democratic society, the frame can be used to make a candidate’s position clear on a given issue, make certain aspects of the issue more or less salient, and provide the receivers of the information with definitions, interpretations, evaluations and treatments that are in line with their policies (Entman, 1995: 52; Arbour, 2014: 606).

While the use of frames in totalitarian states is more limited than that of one with free media, the propaganda within a state such as China still uses some of the key methods for frame definition and building to guide its peoples’ perspectives and thoughts processes. Frames can be used either as ‘frames in communication’ or ‘frames in thought’; the former being the way that media or government communication systems conveys information while the latter is how the individual interprets such information (Chong & Druckman, 2007a; Chong & Druckman, 2007b; Scheufele, 1999).

It is therefore no surprise that media engagement with the recent events surrounding Liu Xiaobo’s illness and death used frames to define the issues at hand. Even more interestingly, the frames used by Western versus Chinese sources portrayed completely different views on who the man was and what he stood for. 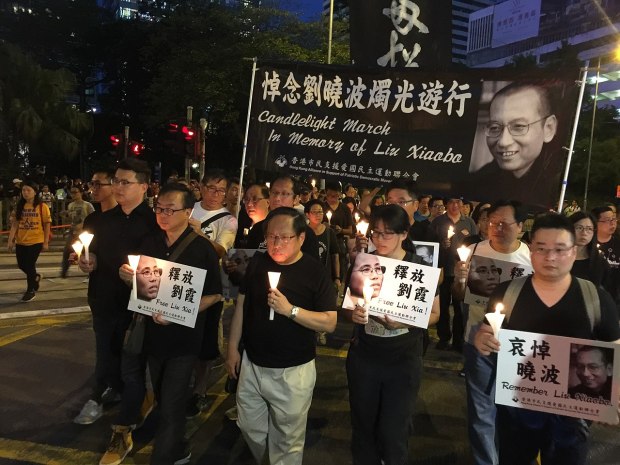 In Western publications from countries such as the US, UK, Germany and Norway, Liu’s passing is framed as a tragic loss for human rights activists, democracy, and China. They focus on his contributions to society and his unyielding spirit of hope and love. Many look at his participation in the 1989 Tiananmen Square Democracy Movement as the starting point to a long and difficult road to influence Chinese society for the better. Other articles express a great deal of scepticism and suspicion at the late diagnosis of his condition and some even blame the Chinese authorities for covering it up to the point of no return. After Liu’s medical parole many Western leaders and physicians urged China to release him fully to seek medical treatment abroad, or at the very least to spend his remaining time surrounded by family and friends (article 1, article 2, article 3). In addition, several articles mention his wife’s situation under effective house arrest since 2010 as deplorable and advocate for the government to free her from her confinement.

On the other hand, the Chinese media sets out a completely opposite frame that paints Liu as an instigator of subversion and an enemy of the state. When the Chinese media addresses Liu Xiaobo’s situation and history at all (often he is not mentioned at all in state media), it is in highly controlled snippets of information that present a weak and ill man no longer a threat to Chinese society. Several news sources such as the English language online newspaper ‘Global Times’, the People’s Daily and Xinhua news focus on Liu’s crimes stating that he was ‘led astray by the West’, that his continued dissidence was due to foreign pressure, and that he was justly incarcerated for attempting to subvert state power.  Other articles comment on how well the Chinese system is treating Liu in his illness, his family’s gratefulness for his treatment and burial, and that the West’s idea that there was any deliberate attempt to conceal Liu’s illness is an absurd conspiracy. Another article calls for an end to the politicization of Liu Xia and that she is free and protected as a legitimate citizen of China. Furthermore, they contend that the West is only using the deification of Liu as a means to push their own political agenda . Xinhua news’ headline reads ‘China urges relevant countries not to meddle in domestic affairs with Liu Xiaobo case’ and the People’s Daily says that Liu’s death is no excuse to meddle in the affairs of a sovereign state.

Liu Xiaobo stood out from the crowd. He worked his whole life for what he believed in: bringing democracy and human rights to China. At 61, Liu’s contributions were immense, and one can only be saddened to think of what else he might have contributed given more time. It is unfortunate that the only coverage in China seems to reflect a state-centric view of dissidence and subversion, never letting the people decide what they think about the man and his cause. Whether one agrees or disagrees with what he stood for, there is no doubt that he was a strong man who held his convictions and would not step down in the face of oppression. I hope his legacy lives on despite the negative views presented by the Chinese media and government.

Looking at two opposing frames of the same issue is an interesting way to delve deeper into the underlying interpretations and slants that the media is using to present the information. There are always at least two sides to every story and facts can be used in different ways to support or refute one’s point of view. In an era of fake news and misleading headlines, it is important to keep in mind how framing can both affect how the message is presented, but also how the information is digested by the audience.

How do you feel about the case of Liu Xiaobo? Please feel free to leave a comment and discuss how the implications of framing affect his portrayal in the media and resultant public opinion.

Chong, D. and Druckman, J. (2007a) A Theory of Framing and Opinion Formation in Competitive Elite Environments. Journal of Communication. 57. pp. 99-118.